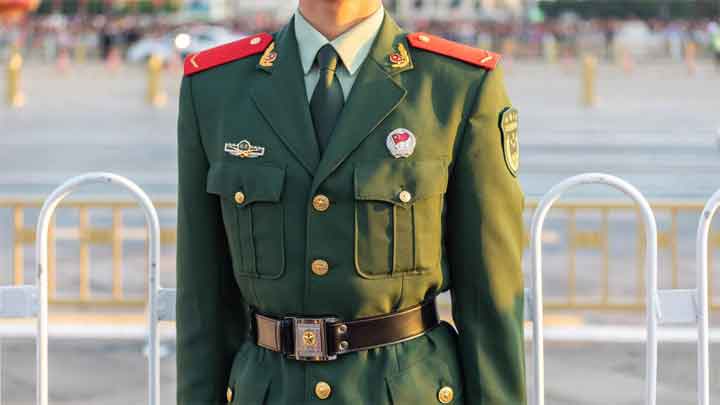 Unlike the civil ranks, whose squares could be purchased towards the end of the Qing dynasty (1644-1911), military positions were prized by the Manchu army, and it is unlikely that ranks were sold to the conquered Chinese. Also upper-class Chinese disliked and were uninterested in the military positions of the Manchu, so were unlikely to covet these squares which were confined to those stationed in the provincial garrisons and to Manchu quarters in the larger cities.

Animals used on military squares were mythical, as suggested by the use of flame motifs usually surrounding the beast. They were often embroidered without any attempt to obtain a true likeness. It is useful to see illustrations of them in order to distinguish the different animals.

The mythical Qilin was the first rank for a military mandarin and it is thought to have great wisdom. The animal is often found in Chinese art and mistakenly called a unicorn by Western writers. It is a composite beast, with a dragon’s head, a pair of horns, hooves, the body of a stag covered with large blue or green scales, and a bushy lion’s tail.

The Lion for the second rank resembled the Buddhist “snow lion” in late Qing. It was a large white animal with green curly mane, back crest and bushy tail. Earlier examples had a blue body.

The Leopard, the third rank, bore closest resemblance to a live animal except at end of dynasty when the spots became faint circles. Sometimes had a circular star with radiating lines on its forehead. Another realistic animal was the Tiger, the fourth rank, with stripes correctly depicted, except at end of the Qing dynasty when stripes became comma shaped lines. It often had the Chinese character for ‘prince’ on its brow.

The Bear for the fifth rank, bore no resemblance to its real prototype being depicted with a blue body, green mane, bushy tail and white paws. It looked very similar to a lion, except in later examples of Qing, when the mane was straight and the lion’s curly. The Panther for the sixth and/or seventh rank, was shown as a yellowish catlike animal with a white chest; no distinguishing markings, find more info.

The Rhinoceros, the seventh and/or eighth rank, was a completely mythical creature better described as the Chinese unicorn. It was shown to be cow-like with a large horn on the back of the head, curling forward between the ears, and a long thin tail. The last and eighth rank was the Sea Horse, not a small marine animal, but the legendary horse of the sea.

When the Revolution overturned the Qing dynasty in 1911, the provincial garrisons were the first places to be attacked. Military officials, afraid of being recognized, burnt their squares and other marks of identification. Furthermore, these badges had no value in the new government, whereas the civil officials often backed the new regime in the hopes of keeping their property intact.

Therefore low ranking military rank badges which would have belonged to provincial soldiers who would have destroyed them means that the eighth and ninth ranks are extremely rare and therefore expensive.