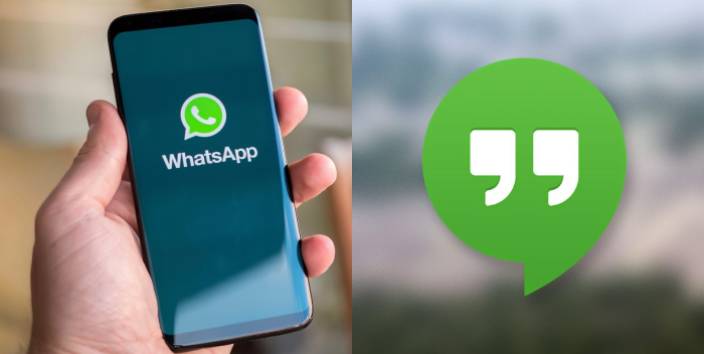 That’s right. Hangouts vs. Whatsapp. Why not iMessage? Easy. Because it’s only on Mac operating systems, ergo, defeat. This is about cross platform messaging apps that anyone can use. Skype? Let’s face it, Skype operates mainly on video calls and is an old time contender. This is about the two most used 3rd party messaging apps. So, sit down and watch (read) the match. The judges wait silently for the bout to start and the referee… Wait, where is the referee?

Whatsapp is based solely, completely, and utterly in the world of messaging. Remember AIM? Imagine it got hit with gamma rays and started having big green anger problems. The advantage is that Whatsapp doesn’t require an account, just a phone number. Google apps on the other hand requires the user to have a Google + account. There is still some privacy in the user experience when it comes to Whatsapp and in that regard it stands alone.

When it comes to functionality, it’s up to the user and what they need. If you want it all, Hangouts is the way to go. If you want dedicated messaging, Whatsapp is for you, Additional resources https://biva.digital/delta-whatsapp-atualizado/.

For an app to succeed nowadays it needs to be about at cross-platform as you can get. If they could make apps for old SNES machines I’m sure they would bring just a few more customers, myself included. Both Hangouts and Whatsapp are offered for a variety of operating systems and this round is bound to be a draw or based specifically on your needs.

Whatsapp offers their app on Android, iOS, Blackberry, Windows Phones, and Symbian. That is pretty much all of the smartphone operating systems. It isn’t offered on any desktop style platforms but who knows what’s in store for Whatsapp’s future after Facebook jumped into the picture.

Hangouts boasts a similarly diverse array of operating systems but in a different context. It can be used on iOs and Android smartphones but outside of that it is only available on Mac’s OSX, Windows, Linux, and the web.

For those of us on the go, which is pretty much everyone these days, we need options. Not just some. We want them all. Neither of them have it all but in this case Whatsapp is the most versatile app when it comes to mobile use, which it is designed specifically for. IOS and Android are the most popular but that doesn’t mean you leave out the little guy, does it?

According to a post by Econsultancy earlier this year, Google+ had achieved 1.15 billion users. The only downside was that only 35% of them are active. That’s around 402.5 million users. That means that only 402.5 million users could be using Hangouts, seeing as how you need to have a Google+ account to utilize it. This was around February of 2014 and the numbers vary depending on the website you go to.

Whatsapp hit 500 million in April 2014 and 600 million in August 2014. That’s a lot of users. Zuckerberg, the Facebook one, says that he can see Whatsapp reaching 2 or 3 billion users while still being ran independently from Facebook. Now, that’s a lofty goal but seeing that Whatsapp developed it’s over 600 million users in just five years I believe it could be possible that they surpass the Facebook user average. It’s clear that as of right now this round is going to go to Whatsapp.

It turns out that the reason we couldn’t find the referee is because there isn’t one. The judges also left and joined the crowd around the ring. The fight was good and it’s going to go well beyond just these three rounds. These apps are highly controversial when being compared and in the end it’s only the fans who can decide. Whether you want the app that does it all or the app that is streamlined for its exact purpose it’s up to you. Both Whatsapp and Google Hangouts can be downloaded from the app store on whichever device you have. Unless, that is, you want Hangouts and you have something other than iOS or Android.